The following touching story was submitted by 16 year old Maya Cortez from Lexington, Mass. after volunteering with her family at RISE in August. 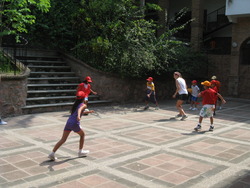 had an amazing experience volunteering at RISE. Everyone welcomed us with open arms and huge smiles. I will never forget the minute I walked into RISE: a little boy, who later was introduced to me as David, took me by the hand and starting leading me around his home. This kind of affection was displayed by everyone I met at RISE, children and guardians alike. As for the kids, I think they really enjoyed having someone watch them in awe, as they kept doing the same trick with the bouncy ball, and to have someone who would play ten games in a row of connect four. The expression on their faces when I gave in to one more piggy-back ride was priceless. We also enjoyed playing soccer with them, and teaching them new soccer skills. While at RISE, I was also able to make a special dinner of hamburgers and fruit salad for everyone, 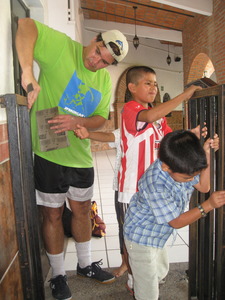 staff included. I realized how much of a treat it actually was when all I heard the whole day were questions about when dinner would be ready. I also learned how fast news travels on the playground at RISE because the moment I walked out of the kitchen I had two kids wrapped around my legs saying that they heard they would be having hamburgers for dinner and wondering if the rumors were true. My trip to RISE has made me further appreciate how lucky I am to be able to travel the world putting smiles on the faces of people less fortunate than I. Saying our final goodbye was extremely hard, but it was made easier when we promised to return in the future, “Si Dios quiere”.

For more information on volunteering or visiting RISE, click here.